Posted on Apr 11, 2020 by Organization Of Eritrean Unity Leave a comment 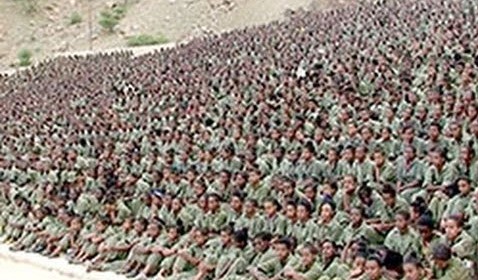 COVID-19 is a borderless pandemic that is spreading across the world exponentially. Combating the spread of the virus would require taking radical measures with effective leadership response, inter-ministerial coordination, global cooperation and the establishment of crisis management and advisory body comprising healthcare professionals and scientists. To that end, countries are taking a coordinated national approach to fight COVID-19, including mobilization of national resources, declaring lockdowns, shutting down schools, enforcing curfews, releasing prisoners, closing borders, banning travels and declaring a state of emergency. A delayed response to this pandemic has already proven deadly and hence overwhelmed some developed countries that have tremendous resources and strong health care systems. For instance, Italy and  the US  have the highest number of deaths among the richest countries in the west. As countries have now realized  the difficultly of tackling the spread of this deadly virus through unilateral response, they are seeking  multilateral partnership, cooperation, professional and material support from other countries including China and Cuba.

The coronavirus outbreak can ravage Eritrea, in part because it is happening amidst a socioeconomic crisis, unscrupulous governance, a massive number of prison population, overcrowded Sawa military encampment  and crumpling health care infrastructures with deserted healthcare professionals and absent command center.

Eritrea is a country with the highest prisons per capita. It has around 360 prisons throughout  the country with overcrowded and unsanitary conditions that would likely facilitate the spread of the virus. However, the regime has refused to release any prisoner so far. It is worth noting that most Eritrean prisoners have not been convicted of any crime. They have been arrested arbitrarily without the due process of the law. Hence, releasing detainees/prisoners must be one of Eritrea’s national priority to curb the spread of the virus.

From 2003-to date, the Eritrean regime has  been coercing senior high school students to spend their final year of secondary school at the Sawa military training center where approximately four to six thousand students attend each year. This is part of the regime’s indoctrination and re-education program where student live in an overcrowded warehouse under subhuman living standards with inadequate hygiene and sanitation conditions.

Prevention, mitigation or suppression of transmission measures such as self-isolation and physical distancing are virtually impossible in Sawa. Therefore, the camp should be immediately shutdown at least during the public health emergency period. As potential coronavirus outbreak in congregate living settings can induce a massive fatality rate, refusal to shut it down would be dereliction of duty that puts everyone’s safety in peril.

In addition to the crumbling health care system, the Eritrean regime has also shut down more than 20 Catholic-run health centers that served over 170,000 vulnerable people per year. Therefore, the weak public health infrastructure and non-existent health care system is not equipped and/ or prepared to treat mass infections. For that reason, a proactive measure of prevention would be one of the most imperative strategies to combat the spread. For this emergency epidemic response to work, it should be designed and implemented in an evolving consultation with healthcare professionals. In Eritrea, however, there is neither a national plan nor a consultancy of healthcare professionals to fight the virus. Thus, it is incumbent upon all citizens, mainly the in-country healthcare professionals, community leaders, religious leaders, volunteers,  and other professionals to establish task forces in every community, city, and village to ensure the wellbeing, health and survival of Eritreans during this turbulent time. In addition to the inadequate preventive and responsive mechanisms for containing and mitigating the virus, the country does not have a full capacity to identify, test, confirm and treat those infected.  As if that wasn’t bad enough, the regime has rejected the generous donation of preventive materials and Coronavirus test kits from Jack Ma of China, including masks, protective suits and gloves. This raises questions if the regime is willing or able to protect the lives and safety of the Eritrean public. This is a public health crisis that could result in mass casualties and unprecedented socioeconomic damages. A responsible leader would understand the urgency and priority of protecting and saving human lives. There is no room for a political blunder, inward-looking nationalism, and incompetent leadership. The presence of incompetent leadership in Eritrea is a fertile breeding ground for the pandemic. This could make the prevention and mitigation of the transmission of the virus extremely difficult. Instead, it will further facilitate the rapid propagation of the pandemic. Besides, since 80 per cent of Eritrea’s population depends on the informal economy for its livelihood, labour disruption and extended restriction of movement will prove socially and economically costly with potentially devastating humanitarian consequences. As the state is failing to live up to the international standard measures of prevention and mitigation, The Organization of Unity for Democratic Change (UDC) appeals to the international community for help to step up the prevention, and mitigation-related operational and logistical support, and delivery of emergency relief assistance to help the vulnerable population.

We are aware that fighting COVID-19 starts with public access to water and sanitation because regular handwashing is a key tool in combating this deadly virus. Be that as it may, Eritreans do not have access to clean water to drink and cook their food much less to frequently wash their hands. The general public and health facilities have very limited access to clean water for hygiene and sanitation across the country.  As water taps have not been running for a while, a great portion of the population has relayed on private water trucks. Now that quarantine and restrictions of movements are in place, it will be much harder to access the private water distributions. It is the state’s responsibility to fully guarantee citizens access to water and sanitation which is the only way for the population to comply with WHO’s recommended hygiene measures. This is a critical time that requires a timely and responsible response to protect the population including providing water free of cost for the duration of the crisis.  The UDC also calls for the UN agencies and other entities to play a critical role in setting emergency safe drinking water and handwashing facilities in key city locations and high-density public places in Eritrea.